For the second time, the Kigali Genocide Memorial has hosted the International Holocaust Remembrance Day in Rwanda. The event was organised in partnership with the Embassies of Israel and Germany and featured a lecture from Dr Lea Prais, Director of Projects at the International Institute for Holocaust Research, Yad Vashem, in Jerusalem, Israel.

Welcoming guests to the event, Regional Director of Aegis Trust, Freddy Mutanguha thanked everyone for coming to commemorate the victims of the Holocaust. Aegis Trust runs the memorial on behalf of the Government of Rwanda. The remembrance ceremony began with the laying of wreaths and red roses on the memorial mass graves.

Germany’s Ambassador to Rwanda, Peter Fahrenholtz, said the event showed the strong commitment of Israel and Germany to work together for remembrance and to prevent future genocides. He emphasised the importance of everyone joining hands to stop mass atrocities across the world.

“If there is anything Germany can share from its own experience, it is this: facing up to the grim truth of what took place is the only path to begin reconciliation. A past that is not examined fully and honestly will remain a burden for the future,” the Ambassador said.

While delivering remarks on behalf of the United Nations, One UN Resident Coordinator for Rwanda, Lamin M. Manneh, spoke about the shared history between Rwanda and Israel.

“This year we are meeting again at the Kigali Genocide Memorial, a place that carries the same memories of colossal crimes against humanity, a centre that shows that almost 50 years after the Holocaust, yet another terrible genocide could occur, despite the strong commitment of the world to never experience genocide again,” he said.

The lecture delivered by Dr. Lea Prais from Yad Vashem was titled, “The Blurred Stories. The Beginning of the Final Solution”. Her presentation gave an overview of the history of the Holocaust, the liberation of the Auschwitz-Birkenau concentration camp and included horrific footage of Jews being led to their deaths and buried in shallow graves. She also spoke about the remarkable resilience of survivors to always remember their loved ones.

Held under the theme “The Holocaust and Human Dignity”, this year’s Holocaust Remembrance Day reaffirms faith in the dignity and worth of every human being. In 2005, the 27th of January was designated by the United Nations General Assembly as the annual “International Day of Commemoration in Memory of the Victims of the Holocaust”. This day also marks the liberation of Auschwitz-Birkenau concentration camp.

Speaking at the memorial, Israel’s Ambassador to Rwanda, Belaynesh Zevadia said, “We must unite in dismay at the way in which so many were stripped of their humanity and we must work together to educate people and show them the barrenness for their prejudices, to create a world in which there is no need for the maliciousness.”

Executive Secretary of Rwanda’s National Commission for the Fight against Genocide, Dr Jean Damascene Bizimana, concluded the event by thanking the countries around the world that have brought perpetrators of the Genocide against the Tutsi to justice.

“We thank Germany and other countries that have captured genocide fugitives. We call on all nations to make genocide a crime and prosecute those who committed genocide. In remembering the Holocaust, we should think about what we can do as individuals to prevent genocide. That is the best way to honour the victims,” he said.

The commemoration event at the memorial brought together more than 250 guests and was jointly organised by the Embassies of Germany and Israel, showing a commitment of the two nations to work together for remembrance and the prevention of genocide. The Kigali Genocide Memorial is the final resting place for more than 250,000 victims of 1994 Genocide against Tutsi. It is a place of remembrance and learning and works with survivors to preserve the memory and dignity of their loved ones. 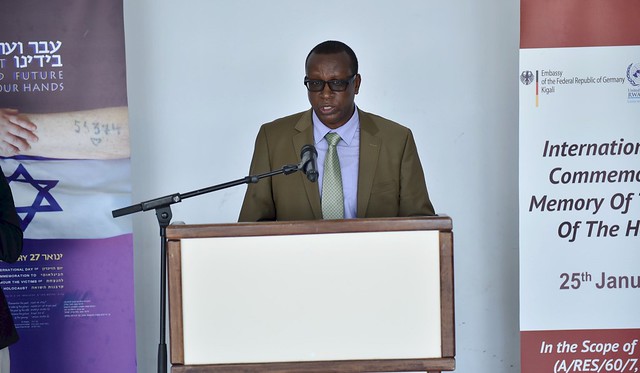 Remarks by Germany’s Ambassador to Rwanda at Holocaust Remembrance Day

Remarks by Israel’s Ambassador to Rwanda at Holocaust Remembrance Day