At the Kigali Genocide Memorial, Government officials, members of the diplomatic corps accredited to Rwanda, students representing others and members from different survivors of the Genocide against the Tutsi associations joined Israelis and Germans to mark the International Day of Commemoration in Memory of the Victims of the Holocaust.

This remembrance ceremony was organised by the Embassy of Israel to Rwanda, UN Rwanda and the German Embassy to Rwanda. Kigali Genocide Memorial was the host.

As people of Rwanda who have experienced the horrors of genocide themselves, this day was a time to stand with the world to remember and honour the more than six million Jews killed in the Holocaust and send a strong message of the importance of fighting genocide ideology.

The event started with a laying of wreath on the burial places at the Kigali Genocide Memorial where more than two hundred and fifty thousands of victims of the Genocide against the Tutsi are laid to rest. A minute of silence was observed in honour of all victims of Genocide around the world.

“This memorial serves as a place for remembrance and learning. Hosting an event like this reminds us again the link between the Holocaust and the Genocide against the Tutsi in Rwanda and of “Our shared Responsibility” to educate generations who will firmly stand up against hatred and prejudice to foster humanity for peace”

During the ceremony two authors, Sarah Stricker a German author and journalist living in Israel together with Odile Gakire Katese, a Rwandan actor, playwright, director and cultural entrepreneur presented their joint work of literature that reflects on reconciliation but also support the idea of “Never Forget” with a perspective that includes the generation of the “later born”.

Dignitaries who spoke at the event, all reflected in one way or the other on the different dimensions and perspectives of the Holocaust history by highlighting stories of the victims and survivors and reminding that we all have choices and decisions to make to contribute to the “Never Again” commitment.

“Never Forget and We Remember are the key words of this and all other Holocaust Commemoration events around the world. The reluctance of survivors to speak about the Holocaust pushes against the very notion of “never forget”. For many it was the only way to survive, by trying to forget. In fact, it’s the antitheses of “never forget”

“We have heard stories of those who ignored their orders and enabled Jews to reach a safe haven that saved one, ten, hundreds and sometimes even thousands of Jews from certain death. This legacy teaches us that each one of us has the duty not to stand by before injustice, persecutions, and violations of human rights and we all can act, each one in a different way, to save human dignity”

“Rwanda is a good example that good can come from worse. A nation that has a story to tell the rest of the world after its horrible history of the Genocide against the Tutsi”

“Let us all stand together embrace diversity and resist all forms of racism, violence and anti-Semitism. The Holocaust was a defining point in history and its lessons have much to teach about the danger of extremism and the prevention of genocide today”

Representing the Government of Rwanda at the ceremony, the Director General of Research and Documentation Center on Genocide at the National Commission for the Fight Against Genocide (CNLG), Dr Jean Damascene Gasanabo said that a day like this sends a strong message that Rwanda, like Israel, has endured genocide and is determined for the past to never be forgotten.

“We have come together to recognize and commemorate the victims of the Holocaust and reinforce our international commitment to memorialize this, and other genocides forever. In doing so, we strive to ensure that such atrocities never occur again”

“We are united by a common vision to fight anti-Semitism, genocide ideologies and all forms of genocide denial, as we know the terrible consequences of these issues if they are not addressed”

This year marks the 73th commemoration of the Holocaust and for Rwanda; this is the 4th Holocaust Remembrance Day we are marking since we started in 2015. 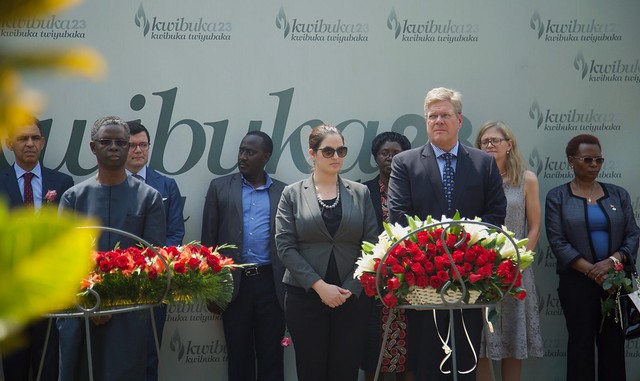