President Edgar Chagwa Lungu of the Republic of Zambia has visited the Kigali Genocide Memorial to pay respects to the more than one million victims of the Genocide against the Tutsi.

During his visit at the memorial, the President laid a wreath on the burial place where more than 250,000 victims of the Genocide against the Tutsi have been laid to rest. He was accompanied by Rwanda’s Minister of Sports and Culture, Julienne Uwacu; Rwanda’s High Commissioner to Zambia, Mukaruliza Monique and the Executive Secretary of Rwanda’s National Commission for the Fight against Genocide (CNLG), Dr. Jean Damascène Bizimana.

President Lungu was guided through the memorial’s exhibits by Honoré Gatera, Director of the Kigali Genocide Memorial who explained the history of division in Rwanda, the causes, reality and consequences of the Genocide against the Tutsi and Rwanda’s efforts to foster a shared sense of national identity.

Concluding his visit, President Lungu said that this place serves as a lesson to other Africans so as to end divisive politics. He said this in his statement written in the memorial’s guestbook:

This visit reveals how the entire continent of Africa was colonised, divided and subdued by the colonisers based on “Divide and Rule”. As Africans, we have a lot to learn from here. We cannot continue to be divided anymore

.
In his touching message of hope to Rwandans, President Lungu said: 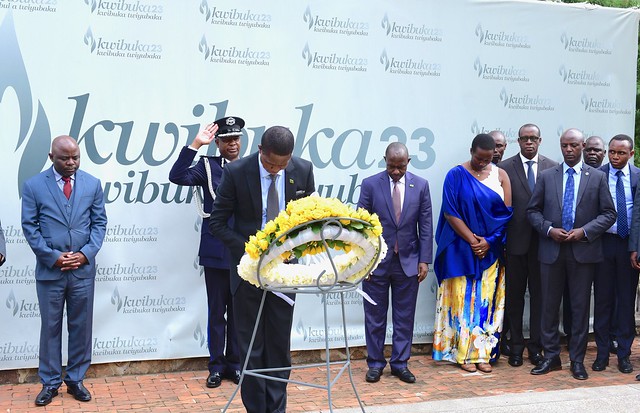