The Kigali Genocide Memorial has hosted the first in a series of Kwibuka Film Screenings and Conversations. The event included the film Ubumuntu, which tells the story of rescuers, as well as a conversation with Damas Gisimba, a man who saved more than 400 children during the Genocide against the Tutsi. One of those rescued by Damas, Olivier Nduwumukiza, was also part of the question and answer session.

Honore Gatera, Manager of the memorial, welcomed guests and said the memorial will be hosting a number of similar events throughout the 100 days of mourning of Kwibuka22.

“These events serve to not only remember the victims of the Genocide against the Tutsi but also for us to take lessons from what happened. Tonight, we have the honour of interacting with Damas Gisimba. His courage and humanity are testament to the power of the human spirit and something we can all learn from,” Honore said.

The event began with a screening of the film Ubumuntu, produced by the Aegis Trust in partnership with the USC Shoah Foundation and GIZ. The film is about those who risked their lives in the Genocide to save people from killings and persecution. You can watch the film below.

Giving his testimony, Oliver told how he was rescued by Gisimba whom he once feared due to his name. The Kinyarwanda word Gisimba loosely translates to ‘monster’.

“I was ten years old during Genocide against Tutsi. We were five children and our parents in my family. My younger brother Claude and I were the only ones to survive. At first, we were afraid to go Gisimba’s orphanage because his name scared us. But we got there, things were very different from what we expected. Gisimba became our father and we will always be thankful to him.”

When asked where he found the strength to stand against the killers during the Genocide, Gisimba said the only thing that pushed him to risk his life was the spirit of love he has for people and especially for children.

“Before the Genocide, I had an orphanage of many children. I had loved children for so long. I decided that no one would kill any of my children unless they killed me too. I made this promise to myself. I think that God also helped me but it was not easy. Some of the people who fled to me were killed. I was not able to save all of them.”

Denyse Kayitesi and Diana Mutoni, two of the children Gisimba looked after and who are now young adults, expressed how Gisimba is an exceptional person who did what others failed to do.

“Gisimba has the biggest heart in the world. He is a man who has a full heart because what he did for those children was unbelievable,” Denyse said.

“I was supposed to be at school tonight but I could not miss this opportunity to hear our Dad, Gisimba, speak. I call him my father because I cannot express how grateful I am for what he did for us. Be blessed Dad,” Diana said.

One of the event guests, Jonathan Salt, a Holocaust studies teacher from the United Kingdom, said that Gisimba made a choice that many others failed to make and that he is a true, living hero.

“Gisimba chose good over evil. He did not allow himself to be influenced by the spirit of hatred that was everywhere during the Genocide – in schools, home, markets… Tutsi were being discriminated against and killed everywhere. I believe that what Gisimba did gives us hope that the peace that we are struggling for will come to pass.”

The event was held under the framework of the Rwanda Peace Education Programme, which is funded by Sida, the Swedish International Development Cooperation. 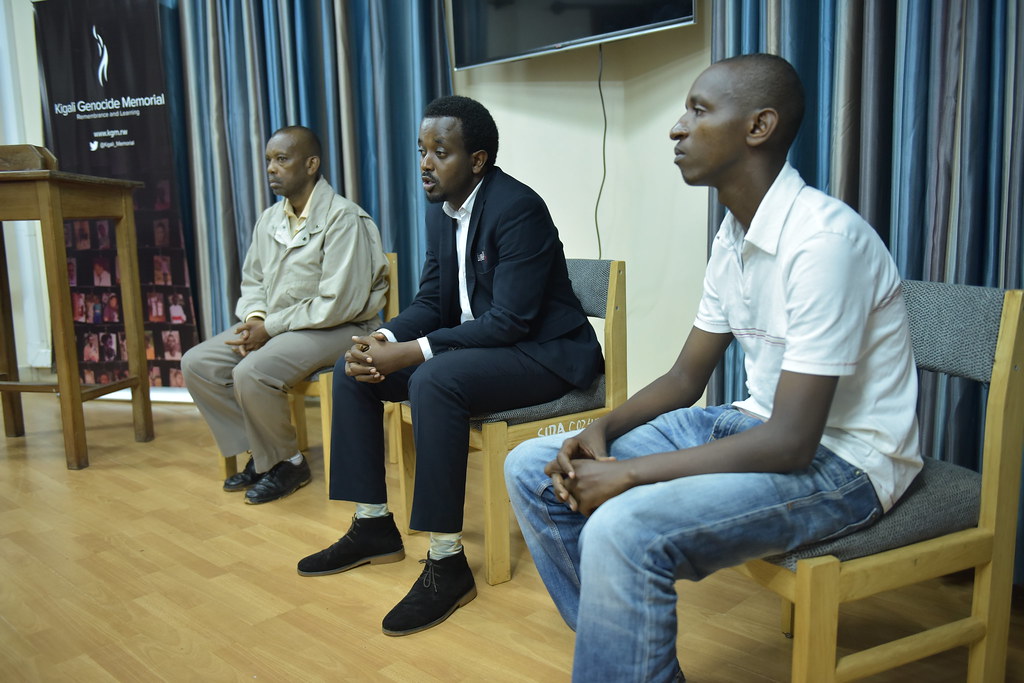