The Kigali Genocide Memorial has hosted a Kwibuka Conversation on the Root Causes of Genocide. The conversation was organised by Aegis Trust in partnership with the Institute of Research and Dialogue for Peace (IRDP), and was supported by the German Development Agency and the German Civil Peace Service.

The event took place as part of activities marking the twenty-third commemoration of the Genocide against the Tutsi – known in Rwanda as Kwibuka23. Kwibuka is the Kinyarwanda word for ‘remembrance’.

The panelists and participants discussed the root causes of genocide, division and dehumanisation, and the efforts undertaken to fight genocide ideology. The conversation was the first in a series of three similar events organised by Aegis and IRDP. The next two conversations will take place at IRDP in Gisozi and in Huye, Southern Province.

The gathering was opened with a welcome note from Yves Kamuronsi, Aegis Trust Country Director:

“Today we remember the victims of the Genocide against the Tutsi in 1994, and I comfort everyone here who lost their loved ones. As we commemorate the Genocide for the 23rd time, we must remember that the killing of Tutsi started before, since 1959, and we need to learn about this past to ensure the future is free from genocide.”

To begin the event, participants watched a short documentary on the history of division and dehumanisation in Rwanda and some of the historical factors that contributed to the Genocide against the Tutsi. The film featured analysis from experts including Hon. Nkusi Juvenal MP, Assumpta Mugiraneza, Hon. Kalisa Evariste MP, Senator Dr Richard Sezibera, and Senator Tito Rutaremara.

After the film, moderator Dr Philbert Gakwenzire led a discussion with Senator Tito Rutaremara, Hon Evariste Kalisa MP, Hon Juvenal Nkusi MP and Assumpta Mugiraneza from Iriba Centre. The panelists explored the historical factors that led to the Genocide and spoke about the experiences of Rwandan refugees, who were forced to flee targeted violence from as early as 1959, and described their own experiences living abroad.

“The clergy would preach divisionism in their services. In addition, colonial air commandos supported the Parmehutu party. That helped contribute to the systematic killings that occurred in Byumba in 1962. That’s when my family and I were forced to flee. We first went to Buganza, then to Mutara and finally found refuge in Kizinga, Uganda. The life of a refugee is a fugitive life. We always dreamed to live in Rwanda – a country, we were told, that overflowed with milk and honey,” said Sen. Tito Rutaremara.

Speaking about the role of propaganda as one cause of genocide, Assumpta Mugiraneza highlighted the destructive power of hate radio:

“Rwandans at that time believed everything they heard on the radio – from the hate speech and incitements to violence to the songs that degraded and dehumanised Tutsi. They could never doubt or criticise the credibility of what they were listening to. People weren’t allowed to think, they had to believe in what they were told,” she said.

“In 1973, when I was at school, one of my classmates who was probably about 17 yeears old compared Tutsi with weeds that must be burned after being uprooted from the land,” Hon Kalisa said.

After a break, Freddy Mutanguha from Aegis Trust moderated a panel discussion with Senator Dr Richard Sezibera, Professor Deo Byanafashe, Kalisa Rugano, and Dr Eric Ndushabandi from the Institute of Research and Dialogue for Peace (IRDP). They discussed mainly division and dehumanisation.

As a historian, Kalisa Rugano, highlighted examples of discrimination in the education system:

“Tutsi faced discrimination in many parts of life, including their schooling. For Tutsi who were lucky enough to get into university, some Tutsi graduates were addressed as only auxiliary competent degree holders,” he said.

The event was closed by Freddy Mutangana who thanked the panellists and encouraged everyone to attend the next Kwibuka Conversation at IRDP in Gisozi. 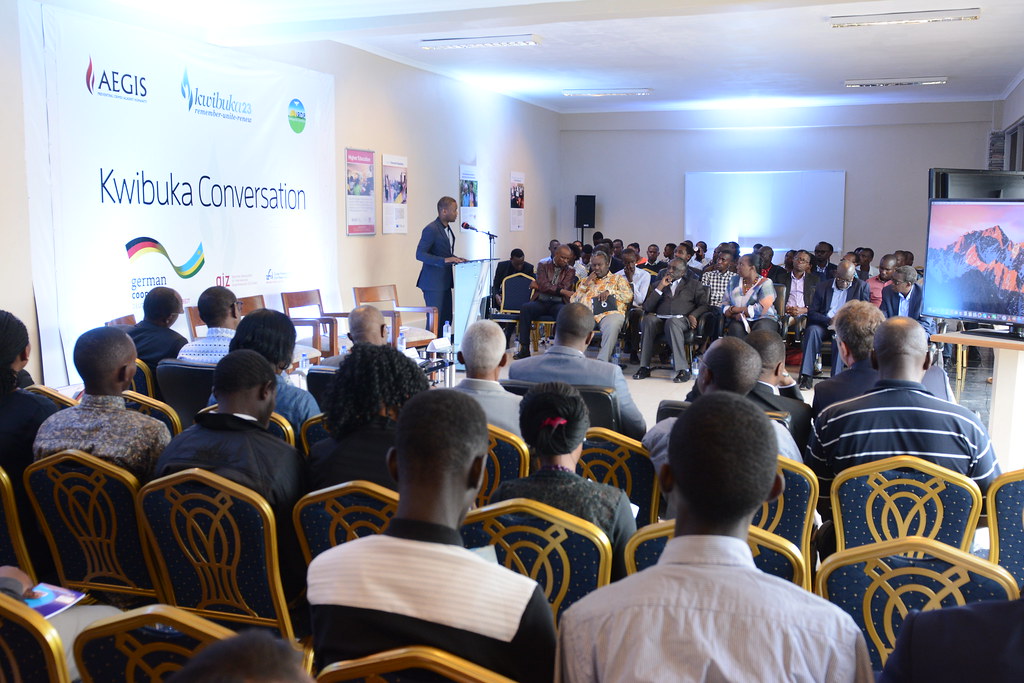