The commemoration began with the laying of wreaths on the burial place where more than 250,000 victims of the Genocide against the Tutsi are laid to rest. In his welcoming remarks, Yves Kamuronsi thanked everyone for taking time to remember the more than one million people killed in the Genocide against the Tutsi, saying that we remember to ensure genocide will never happen again in Rwanda or elsewhere.

He continued by comforting survivors and recognised that this period means a lot to them and each day of the 100 days of mourning brings back painful memories:

“Survivors have told us that the Kigali Genocide Memorial is a home to them – it is my home too. Everyday, I remember my father, mum and brother who are buried here. It is a place that I feel privileged to work because every time I come to work here with a belief that what happened in Rwanda should never happen again, either here or anywhere else in the world,” Yves said.

He concluded his remarks by thanking the UK Government through DFID for their support to Aegis Trust’s peace education programmes, preservation of the memory of the Genocide and documentation of the post-genocide reconstruction process.

“We are grateful for your continuous support which we believe contributes tremendously in educating the next generations and contributing to the healing process of everyone affected by the Genocide. We owe it to the victims of the Genocide to tell the truth about what happened to future generations around the world,” he added.

Célestin Biziyaremye, who has been working at British High Commission for the last twelve years, shared a testimony of his hard journey during the Genocide and how grateful he is to DFID. He spoke of how being employed enabled him to raise six children, even though he was only twenty years old at that time and was not in the position to take on the role of being a parent.

Serge Rwigamba, Head Guide at the Kigali Genocide Memorial, also shared his journey of survival during the Genocide against the Tutsi. He said that working for the memorial has helped him to heal.

“Being a survivor of the Genocide and working in a place like the memorial as a guide, I have to explain the history of the Genocide to visitors. It is a story that brings back many memories of that time. It is challenging, but the memorial has played a big role in healing my wounds. Knowing that I am educating people on how to prevent genocide and build peace is the most rewarding thing to me,” said Serge.

Guests at the event then lit candles to pay tribute to the victims of the Genocide.

Claver Gatabazi, Memory and Genocide Commemoration Officer at the National Commission for the Fight against Genocide (CNLG), recognised their partnership with the UK Government in memory preservation and requested their support to bring genocide perpetrators to justice.

“We thank the UK Government for its strong support in preserving genocide artifacts at the Kigali Genocide Memorial and through the Genocide Archive of Rwanda. We also need your voice, action and advocacy to have genocide perpetrators arrested and face justice wherever they are. They have not ceased their sinister agenda and continue to spread the poisonous ideology that motivated so many Rwandans to slaughter their friends, neighbours, colleagues and even family members,” Claver said.

Closing the event, the British High commissioner said the commemoration period is one of the most important times in the year for him and that the UK will continue to support Rwanda’s development efforts.

“I was really shocked by the violence that took place in the 1994 Genocide against the Tutsi. I want to appreciate the progress that Rwanda has made so far. We will always say “Never Again”. We need Rwanda to continue to have peace itself, for there to be peace in the region and to have an expanding economy. The UK Government will continue to work with Rwanda by supporting different sectors to ensure this progress continues,” he said. 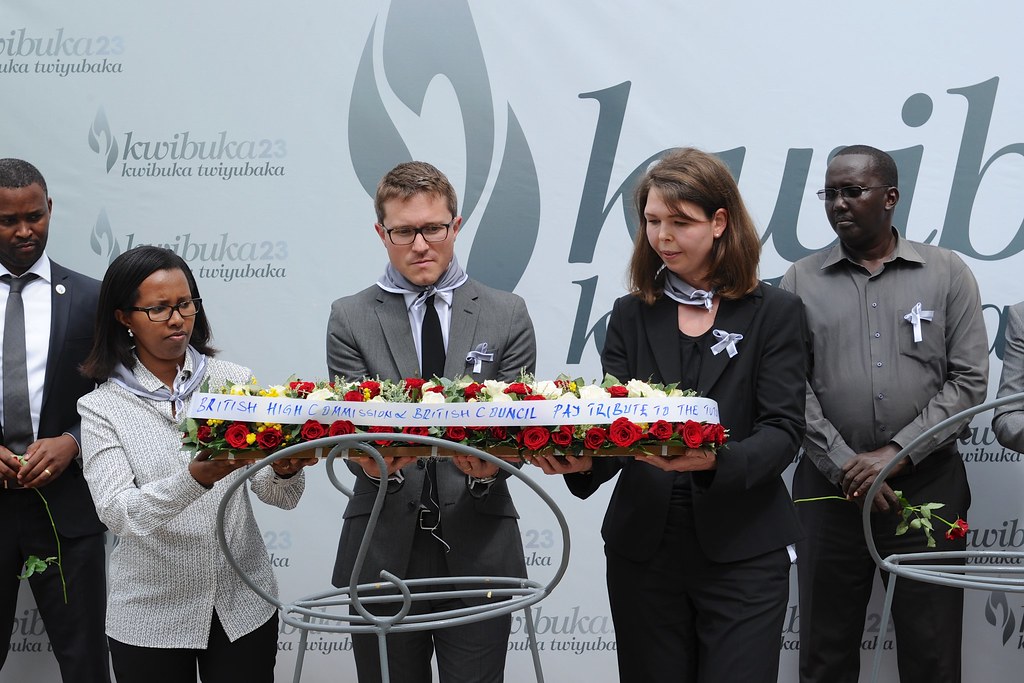